With Guilds of Ravnica preview season in full swing, Standard players are clamouring to see what the future of their format will look like. “Will my favourite deck survive the rotation?” “What new cards can fit into existing archetypes?” “Are people still going to play Nexus of Fate decks?!” These are the big questions on everyone’s minds, but for me I only have one thought in my head: “Graveyard decks are back!” While there were hints at graveyards becoming a resource again in Core 2019, such as Stitcher’s Supplier and Desecrated Tomb, no one could have predicted introducing both Surveil and Undergrowth as mechanics for Guilds of Ravnica. Both the Dimir and Golgari guilds have powerful graveyard-enabling mechanics, so I got to thinking. Rather than choose one, why not mash them both together into a Sultai deck?

Surveil is easily the most exciting mechanic I’ve seen in quite some time. This is 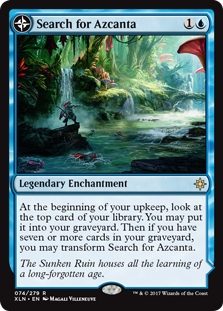 effectively scry on steroids, as putting cards into your graveyard will often be far more useful than putting them on the bottom of your deck. In Modern and Legacy this can fuel delve creatures like Gurmag Angler or put giant monsters into the graveyard to reanimate. For Standard, there are several cards that survive rotation that absolutely love having cards in your graveyard. From Search for Azcanta to Fungal Plots, cards that get value out of sending cards to your graveyard are going to have a high impact on deckbuilding. For example, how much faster could we get Search for Azcanta online if Glimmer of Genius surveiled instead of scryed? Depending on the number of cheap surveil effects, a turn 2 Search for Azcanta could get online as early as turn 4 and start generating incremental value from there.

Surveil also allows players to dump giant monsters into the graveyard to reanimate later. There are already a couple of powerful effects that let you do this in Standard, such as Rise from the Grave and Boneyard Parley, so it’s not unreasonable to think that a Nezahal, Primal Tide or Zacama, Primal Calamity on turn 5 would be the norm. In a Sultai shell with green accelerators, you can get this going even faster. As well, there are several ways to abuse the self-mill effects of surveil through Narcomoeba. Getting free creatures is always a plus, and they can either chump block to buy time against aggressive decks like Boros, or can even be used as sacrifice fodder for Torgaar, Famine Incarnate. 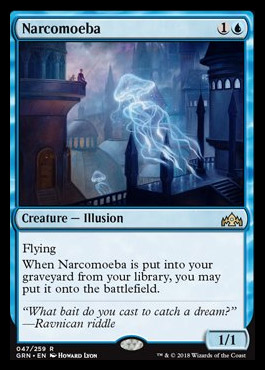 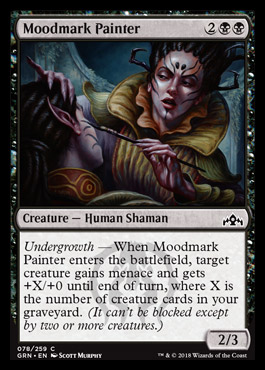 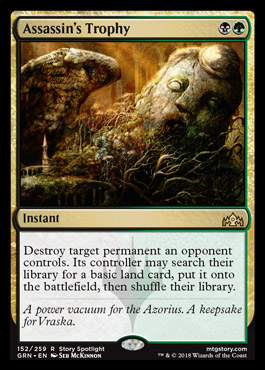 Most importantly, surveil combines particularly well with the undergrowth mechanic, and it’s the main reason I advocate Sultai so highly for the new Standard. Since undergrowth scales with the number of creatures in your graveyard, using surveil effects to dump bodies into the graveyard can increase the power of your undergrowth cards at a much faster rate. For example, a Moodmark Painter can turn any creature you control into a sizeable threat in the late game, but if we surveil in the early turns we can get a fair amount of value out of it even on turn 4. This works particularly well in a Sultai aggro shell that effectively lives out of its graveyard, turning fallen attackers into bonuses with later undergrowth cards.

Sultai arguably gets the most out of this upcoming rotation. As we’ve seen through the spoilers, it gets near perfect mana with Overgrown Tomb and Watery Grave, incredibly power card draw and filtering with surveil cards like Notion Rain, and Assassin’s Trophy, which is one of the best removal spells ever printed. Factor in two incredibly powerful and synergistic mechanics and you have a colour combination that can go in multiple directions, from aggro to control to even reanimator. I’m personally leaning toward an aggressive shell with cheap creatures that chip away at their life total and fill my graveyard so I can power out Torgaar or Molderhulk way ahead of schedule. Toss in some cheap creature removal, hand disruption, and countermagic for tempo and we’ve got a party. But no matter which way you choose to take a Sultai deck, there’s no doubt in my mind that it will be a pillar of the next Standard season.