Commander can be an expensive format to get into if you’re not prepared. With older staple cards constantly getting bought out, it can be difficult to piece together “ideal” builds of certain archetypes. When you build Commander decks as often as I do, it can be a major pain constantly picking up copies of these expensive cards over and over again, so when an idea pops into your head that mitigates this headache, you just have to do something about it. I love to challenge myself when building new decks, so to help the wallet fatigue that comes with every new Commander release, I decided to build this week’s deck with no rares or mythics. While I’m allowing myself a little wiggle room for cards that have been downshifted from rare, such as Heroes’ Bane, the overall goal of the deck is to create something that can hold its own while on a budget.

Arixmethes, Slumbering Isle is one of the most confusing creatures in Commander 2018 simply because it falls into a design space we’ve never had to deal with before. While Dryad Arbor paved the way for land-creatures back in Future Sight, this is the first time we’ve ever been able to cast a land card. We 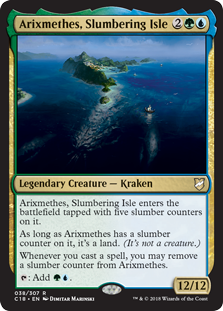 essentially now have access to a four mana Simic Growth Chamber that can sometimes attack for twelve. However, one thing most people tend to overlook when evaluating this creature is that it is also a Simic Growth Chamber when it’s a creature. There are plenty of ways to use this fact, such as using Arixmethes as a glorified Greenweaver Druid, but what if I told you that it was possible to make infinite mana without the need for rares?

There happen to be not one but two non-rare auras that allow Arixmethes to go infinite. Both Freed from the Real and Pemmin’s Aura let you untap the enchanted creature by playing one Blue mana. Since Arixmethes can tap to produce UG, we can use the Blue mana we make to untap it while netting a Green mana every time we perform the loop. This gives us infinite Green mana we can use for whatever we feel like. And while infinite Green mana on its own is fantastic, there are also ways that we can convert this into Blue mana so we can use the rest of our spells. Orochi Leafcaller, Nomadic Elf, Gemstone Array, and Llanowar Envoy each let us spend our Green mana and filter it into another colour, so all we need is one of these and we can produce Blue mana to cast our cantrips and hit a payoff that lets us win the game. 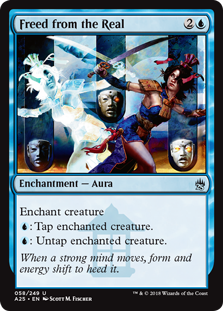 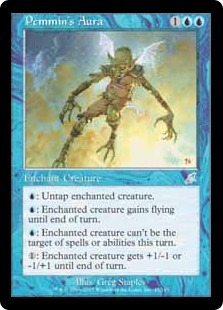 Normally a deck like this would be looking at a Blue Sun’s Zenith or Genesis Wave as a finisher, but with the no-rares restriction we have to get a little more creative. Fortunately, there are several common and uncommon mana sinks that, while traditionally serving as Limited fodder, can win us the game very easily. Jade Mage, Thundering Spineback, and Sprout Swarm can creature an infinite number of tokens at instant-speed, so we can combo off on our opponent’s end step and attack the table. As well, we can dump our mana into Heroes’ Bane, Domesticated Hydra, and Shapers of Nature to make infinitely large attackers, or even ping our opponents to death with infinite activations of Goblin Cannon. We simply respond to each activation with another activation until the entire table goes kaboom. 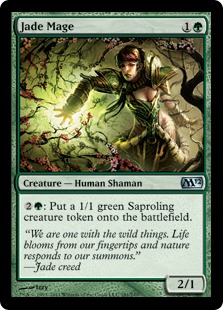 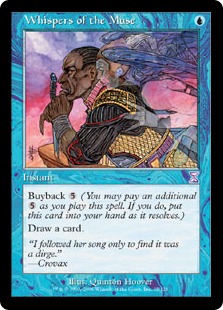 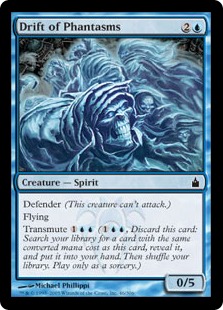 We also need ways to actually draw into one of these game-ending threats so we also have to include mana sinks that let us draw cards. Azure Mage, Treasure Trove, and Whispers of the Muse let us draw our entire deck by repeatedly drawing a single card until we decide to stop, while River Hoopoe does the same but also nets us life so it can help stabilize our life total against instant-speed damage. Furthermore, Duskwatch Recruiter can draw every creature while stacking the rest of the deck.

For the rest of our spells, I decided to use as many cheap cantrips and ramp as I could to awaken Arixmethes as quickly as possible. By coupling Brainstorm, Ponder, Preordain, et al with two mana ramp spells, we can both dig into our combo pieces and threats while having the ability to shuffle away unwanted cards. As well, since there are so few ways to tutor up Freed from the Real and Pemmin’s Aura in Simic even with rares, I’ve opted to include Drift of Phantasms to transmute for them in case we can’t draw one naturally. Fortunately, with the amount of one-mana cantrips in the deck it doesn’t take too long to find something to help enable the combo. 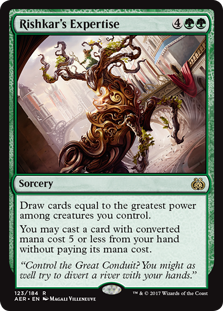 moving pieces are commons and uncommons. Should I want to revisit the deck and add some more powerful cards, I would definitely look into more powerful tools for stalling out the board while we dig. For example, Whelming Wave and Devastation Tide are fantastic at resetting the board without bouncing our commander. As well, I would definitely include some larger, more powerful draw spells like Rishkar’s Expertise and Blue Sun’s Zenith. Since we can generate so much mana so quickly, we can fire off a Rishkar’s Expertise and draw twelve cards fairly easily which should draw into a combo piece more often than not. Adding rares also gives the deck non-combo ways of winning, namely using Hadana’s Climb and Grappling Hook to give double strike or double Arixmethes’s power to kill with commander damage in a single attack. While not entirely necessary, it’s always a good idea to have a backup plan just in case the combo gets disrupted.

I’ve been pleasantly surprised by how powerful Arixmethes, Slumbering Isle has been in testing, even without any rares or mythics. Being able to run an infinite combo deck on a budget isn’t something you see all that often, especially one with so many different avenues of play. The restriction of only playing commons and uncommons really forces you to think outside the box, and while I’ve come up with some solid options for payoff cards, I can guarantee there are dozens of options I either didn’t have room for or didn’t even think of. This is experiment has been very successful, and I will absolutely be revisiting it in the future with other commanders, but for the time being I’m going to keep having fun making an exorbitant amount of mana with everyone’s favourite land/creature/city.