Recovering from the Banhammer

With some of Standard’s most egregious offenders getting hit with the banhammer, it’s easy to think that the sky is falling, especially if you were playing either of the affected decks. Energy decks lose the backbone of their decks in Attune with Aether and Rogue Refiner, while Ramunap Red lose access to some of their reach with the banning of Ramunap Ruins and Rampaging Ferocidon. However, this is hardly the end of the world.

The loss of Attune with Aether is a blow to Energy’s most aggressive start. A curve of 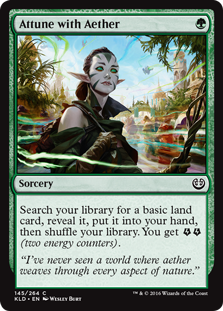 Attune with Aether into Longtusk Cub into Whirler Virtuoso/Rogue Refiner was brutal to fight, especially on the draw, and Attune even gave the deck the ability to splash off-colour cards such as The Scarab God to secure the long game. As such, it only made sense to give that card the axe. Fortunately, Energy decks still have access to cheap energy producers to help support their early game, such as Minister of Inquiries, Aether Meltdown, and Aether Theorist. While this doesn’t alleviate the mana fixing provided with Attune, it does maintain some of those aggressive starts that the deck is known for. As a result, Energy decks will most likely have to streamline by sticking to three or potentially even two colours to offset losing their ability to splash. 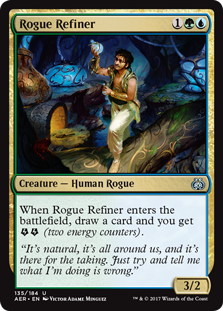 being a sizable threat on curve, so it cemented itself as a major player in Energy decks going forward. In the aftermath of its banning, I can see Energy decks jumping back onto the Glimmer of Genius train that they had to rely on in the past. Overall, while nowhere near as aggressive as it used to be, I believe that Energy lists going forward will be firmly set into the slower midrange role it used to occupy.

Ramunap Red lost its namesake land and with it, its awkward name. Now it’s simply “Mono-Red”, and frankly that’s a good thing. I’m all for lands doing things, but only when there are the appropriate answers for them such as Ghost Quarter or Blood Moon. In Standard, we really only have Field of Ruin, Sorcerous Spyglass, and the upcoming Blood Sun, and let me tell you that if you’re bringing those in, you’re going to lose to the rest of the deck. Ramunap Ruins gives the deck a way to deal repeatable damage without spending spells, so even when they flood out they can still manage to deal lethal damage.

Rampaging Ferocidon was a weird inclusion for me, but after reading WotC’s explanation, it makes more sense. It was designed at a time when Saheeli-Cat was a thing, so its clause of dealing damage to players when creatures enter under their control made sense. However, since Felidar Guardian was banned long before Ixalan was printed, Ferocidon became an answer to a problem that didn’t exist anymore. This ended up getting Ferocidon banned not to fix what was broken, but to prevent it from stifling what is looking to be a tribal, creature-heavy Standard. With Rivals of Ixalan fleshing out the four tribes into actually viable decks, having a creature that punishes players for doing a core (and pushed) component of the game proved to be unfun. 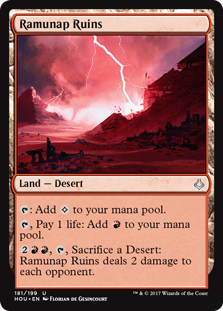 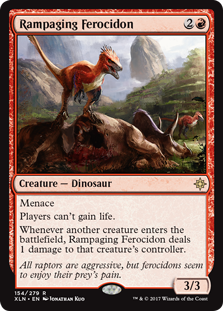 MTGO has inexplicably had access to Rivals for the past week, and from the ashes of Ramunap comes a Red-White aggro deck that abuses powerhouse cards like Relentless Raptor and Path of Mettle to pressure opponents, and while it lacks some of the reach awarded to it by Ramunap Ruins and Rampaging Ferocidon, the speed of this deck gives it a great chance to act as Ramunap’s successor.

In the wake of the bannings, we can only hope that these changes add the diversity we’ve lacked over the past three months. Both Energy and Ramunap Red were hurt in the bannings, but not outright killed, with plenty of replacement options that slow them down to far less oppressive incarnations. From here it’s only speculation as to whether or not these decks maintain their share of the metagame, but we can only hope that the new slew of tribal strategies will keep these former titans in check.