Prepare for Trouble and Make It Double

It takes a lot for me to get excited about a Boros commander. Traditionally it’s been the colour pairing of “Attack a lot with something large”. There’s no subtlety, and if I’m going that route I’d rather have a third colour and play a deck like Gishath, Sun’s Avatar. That’s why when WotC spoiled the new buy-a-box exclusive promo, Firesong and Sunspeaker, it caught my attention. I’d been a fan of Soulfire Grandmaster back in Fate Reforged, and the concept of giving your Red instants and sorceries lifelink is ripe for abuse. Furthermore, dealing 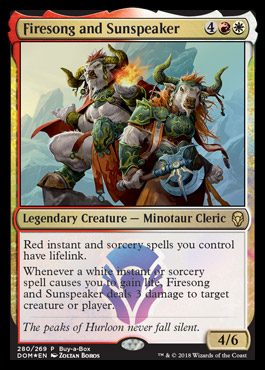 additional damage when your White instants and sorceries gain you life if just value, so I just had to figure out a way to work with this.

Taking a little inspiration from the various Neheb, the Eternal shells I’ve dealt with over the past year, I decided to run this deck in a similar fashion. By pumping out a ton of damage with X spells like Earthquake, we can gain tons of life while wiping away the board. As well, because of the way Firesong and Sunspeaker is worded, any spells we cast that are Red and White will gain us life and cause our commander to Lightning Bolt something. This way we can effectively supercharge a Lightning Helix to gain us six life and deal nine damage, since if the spell instructs you to gain life in addition to dealing damage, our commander’s ability actually triggers twice! On top of all this, with X spells that hit everything, such as Earthquake, by giving the spell lifelink we simultaneously lose and gain life, so our life total stays the same while everything else gets blown up.

With this in mind, I tried to maximize the number of Red and White spells that deal damage and gain life, as well as the number of damaging board wipes. Firesong and Sunspeaker have an obscene six toughness, so it can survive the likes of Hour of Devastation and Anger of the Gods, which conveniently also gain us life for each creature damaged. For example, casting an Star of Extinction with ten creatures in play will gain us 200 life for seven mana. That’s a mana-to-life ratio Oloro, Ageless Ascetic can only dream of. Granted, while this amount of life gain is insane, we still need something to do with it to actually close out the game. Aetherflux Reservoir is arguably the most broken card in a lifegain deck, and I’ve put it to tremendous use in the past with Sydri, Galvanic Genius, so it’s the perfect sink for all the life we’re gaining. 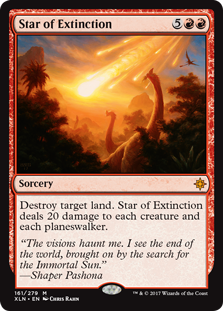 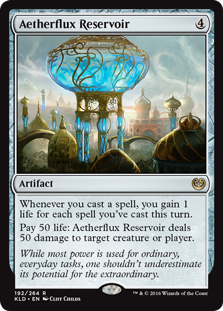 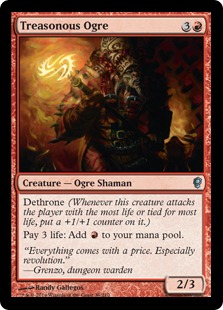 In case the Reservoir plan doesn’t pan out, the deck also has tons of mana acceleration to boost the power of our X spells, and even has Neheb, the Eternal to generate even more mana so we can actually take out opponents in a single hit. Mana Geyser is a classic Commander ritual as it nets us mana for each tapped land your opponents control, so when played at the right time it can be a massive amount of mana generated. Treasonous Ogre is incredibly powerful in this deck with the sheer life we gain over the course of a game. Treasonous Ogre can convert three life into a Red mana, so we can pay a bunch of life into the Ogre, cast a giant X spell, then gain it all back. If the Ogre survives the spell, such as through Darksteel Plate or Cho-Manno’s Blessing, then it can continually turn the life we gain into more and more mana. This way we get to keep casting spells until everyone and everything around us is burned to a crisp.

Firesong and Sunspeaker is an incredibly unique card, and I’m a fan of any legendary creature that allows a colour pairing to branch out from its traditionally ingrained strategies. Boros commanders have been pigeonholed into the “mono-attacker” archetype for ages, and having a Boros commander embrace the “big dumb spells” style of gameplay that Wort, the Raidmother routinely engages in has me eager to test it out. I doubt it will see much in the ways of Constructed play due to its mana cost, but as The Locust God and its ilk prove, six mana commanders are no joke, so it will definitely have a home. So if you’re looking to play big, bombastic spells and keep your life total nice and healthy, preorder a box of Dominaria and get your Firesong and Sunspeaker as soon as you can!