I’m wary of combo decks in Standard these days. As the previous Standard season has 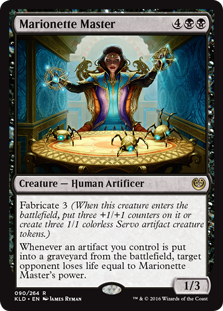 shown us, if you’re playing something outside of the aggro-control-midrange roshambo, it’s highly likely WotC will drop the banhammer eventually. While both Saheeli-Cat and Aetherworks Marvel were oppressive in their respective times, we are currently faced with a Standard falling heavily into the triad WotC would prefer it to be in yet again. Ramunap Red fills in the aggro section, Grixis Improvise and UB Control take the control slot, and the various energy decks claim the midrange. Normally, this would dismay even the hardiest and most steadfast of brewers, but a recent development from Conley Woods has broken open the combo wedge of the metagame.

Marionette Master saw very fringe play in the previous Standard season in Aristocrats-style decks centered around sacrificing a bunch of tokens to drain the opponent with its ability and Zulaport Cutthroat. You simply fabricate the Master as a 4/6 and sacrifice your creatures to an outlet like Ayli, Eternal Pilgrim and repeat until the opponent is dead. Now 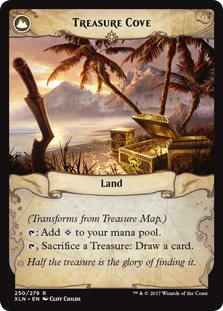 that Ayli and the Cutthroat are no longer in the format, the deck has had to branch out. Fortunately, Marionette Master triggers off of any artifact you control going to the graveyard, which opens up several new possibilities for getting one big combo turn. With a 4/6 Marionette Master we only need to create five tokens to drain the necessary 20 life for a kill. This opens up several avenues for token making since there are now multiple artifact tokens that can sacrifice themselves at will.

First and foremost, we have Tezzeret the Schemer. While this card only saw the bare minimum play in Aether Revolt Standard, it has recently made an upswing in popularity due to Grixis Improvise decks. Making Lotus Petals every turn is an awesome ability for slow, grinding decks because it lets you have mana up even when tapped out. Along those lines, we also have Treasure tokens from Ixalan and the many ways to produce them. Treasure Map and Pirate’s Prize are inexpensive means of generating treasure while netting card advantage and controlling our draws with Treasure Map having the additional advantage of turning your treasure into card draw in the late game. Finally, Spell Swindle curves perfectly into Marionette Master and acts as a defense against large-scale threats like The Scarab God, Torrential Gearhulk, or Vraska, Relic Seeker. This card not only stops your opponent from sticking a huge threat, it also provides you with enough treasure to combo off.

One of the key innovations to the list is Hidden Stockpile. This enchantment, coupled with 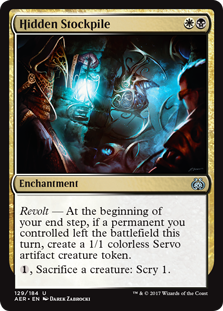 enough ways of triggering revolt, can quickly turn into an engine capable of locking down the ground. Since the majority of decks right now aren’t packing ways of giving trample, your 1/1 servo tokens can chump to their heart’s content. As well, you can sacrifice the tokens to Hidden Stockpile after you’ve blocked to scry, thus giving you even further control over your topdecks. To aid in triggering revolt consistently while also keeping you from missing land drops, the deck runs full sets of Evolving Wilds and Renegade Map, and a single copy of Traveler’s Amulet. These cards help you trigger revolt on your opponent’s turn so Fatal Push can hit larger targets at instant-speed, such as Bristling Hydra in response to giving it hexproof.

Last but not least, we have Contraband Kingpin, which acts as something of a linchpin for the deck. This card performs two roles here, as it is both our best line of defense against Ramunap Red due to its 1/4 body and lifelink, and it also lets us scry whenever an artifact enters the battlefield under our control. With effects that put multiple artifact tokens into play, you can effectively scry away cards until you hit whatever you need so it has a surprising amount of value against slower decks as well.

The sideboard is varied enough to handle most of the big threats in the current metagame. Since aggressive creature decks are such a large part of the meta, the sideboard includes 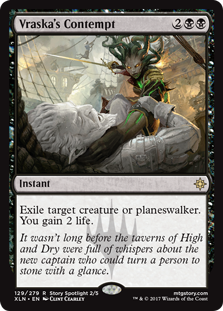 a pair of Fatal Push, a third copy of Fumigate, a Vraska’s Contempt, a Bontu’s Last Reckoning, and an Anointer Priest. Vraska’s Contempt is a catch-all answer to planeswalkers and hard to kill creatures like Hazoret the Fervent and The Scarab God, while Bontu’s Last Reckoning also does a number on midrange decks like Temur Energy. We can easily use our tokens for mana on the turn after casting the Reckoning, so the drawback isn’t even all that detrimental. Anointer Priest is in the sideboard because it has a body that stacks up well against most of Ramunap Red’s threats while also netting us life off of our Hidden Stockpile triggers. As well, it can be embalmed should they destroy it, giving you even more value in a matchup where every little bit of life counts.

The rest of the sideboard is geared toward fighting control decks. Here we can also bring in Vraska’s Contempt if they’re on a traditional UB Control since it helps with The Scarab God, but I wouldn’t recommend it for Grixis Improvise since their threats aren’t as difficult to remove. We also have access to extra counterspells to help fight their threats, such as Negate and an additional Spell Swindle. Cards that allow us to attack the opponent’s hand, such as Duress and Doomfall are also necessary against control, even more so than counterspells, because they allow us to rip opposing countermagic from their hands before we attempt to combo off and resolve a Marionette Master, rather than sitting around waiting until we have enough mana to cast a counterspell in response to an opposing counterspell. Anointed Procession is basically unbeatable if we get to resolve it since we get to double all of the tokens we make. When used with Hidden Stockpile, we 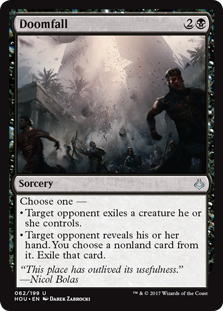 can easily net a critical mass of tokens to overwhelm a control opponent. Finally, because UW Approach of the Second Sun is gaining popularity, a single copy of Lost Legacy is there to tear apart the opponent’s deck and remove their eponymous win condition so they can’t actually do anything.

The sideboard isn’t set in stone, and there are several cards I’ve also considered for inclusion. One of the most impressive cards I’ve tested in a slower environment is Tezzeret, Master of Metal. While resolving a six mana spell can be tricky, as the main win condition can attest, Tezzeret, Master of Metal provides a faster alternate win condition to Marionette Master, just in case we get hit with a Lost Legacy. We can make a ton of tokens in this deck, so his -3 ability can easily drain an opponent in one or two shots. As well, his +1 helps us dig into our Renegade Maps and Treasure Maps, which help thin out our deck and control our draws, which is a necessity in a control matchup. Should we actually get to his ultimate, stealing a Scarab God and all of its tokens can easily swing the course of a game. 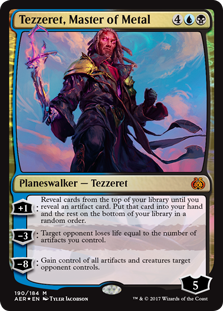 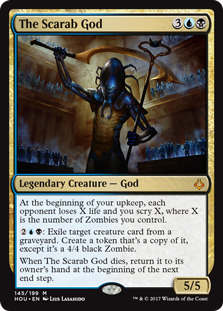 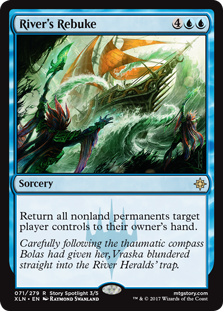 Speaking of The Scarab God, I’ve also considered running a copy of Standard’s best card myself. The sheer value it brings to the table is insurmountable, and there are certain matchups, like against energy decks, where untapping with a Scarab God in play is basically game over. As well, reanimating all of your opponent’s creatures at instant-speed makes attacking you a nightmare, and even the value of bringing back your Marionette Master as a 7/7 makes it even easier to get a late game combo kill. Ultimately, I think this card should probably get a slot in the sideboard should the format slow down toward more midrange decks.

The last card I considered was River’s Rebuke as a means of resetting the board against energy decks. A one-sided board wipe is nothing to scoff at, and while it’s not as powerful as Cyclonic Rift was back in its Standard, against decks that revolve around +1/+1 counters River’s Rebuke can set an opponent back a considerable number of turns. This is especially true against decks packing Bristling Hydra and Longtusk Cub since they tend to accumulate counters over time at the expense of their energy. By bouncing everything, we can waste their resources as well as their time.

Marionette Master has proven to be a seriously strong contender in the metagame, with favourable matchups against many of the top tier decks in the format. While a lot of the deck’s games are draw dependant, the sheer amount of scry effects and card draw make it much easier to get to the cards we need in each matchup. The deck has an inevitability to it that most control decks don’t, and resolving a Marionette Master on a board full of tokens has this “Oops, I win” feeling that I haven’t felt since the last broken combo deck in Standard, so I have high hopes. This deck combines the playstyle of a control shell with the power of a combo deck, so if you’re a die hard combo player looking for something to play this Standard, sleeve up some Marionette Masters!