House of Commons: An Intro to Pauper

Pauper has received a massive boost in popularity lately. From multiple video series on YouTube to pushes from ChannelFireball at the Grand Prix level, this once-niche format has blossomed from only being played on Magic Online to taking the paper world by storm. But just what makes this so popular? With the restriction of only building with commons, or cards that have been printed at common on Magic Online such as Battle Screech, deck building becomes a fun and interesting challenge. With restrictions breeds creativity, and with Pauper, there are some unique and certainly creative strategies that both mimic and 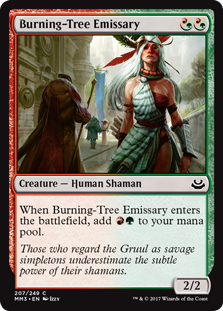 sometimes exceed their counterparts in other formats. Aggro, control, and even combo decks are all viable in Pauper, so there’s a little bit of something for everyone.

Aggro decks in Pauper tend to be the most popular since they often rely on creatures. Ever since Wizards of the Coast shifted its design mentality toward upping the power level of creatures, we’ve been getting seriously scary creatures at every rarity, and common is no exception. As well, WotC has gotten into the habit of downgrading the rarity of some creatures from uncommon and even rare down to common for their Masters sets, so Standard-respective staples like Seeker of the Way and Burning-Tree Emissary have crept their way into a couple of Pauper’s top decks.

Unlike in other formats, when it comes to aggro decks you’ll see often synergy trumping big, swingy plays. This is because it’s harder to close out a game without a big finisher like Hazoret the Fervent or Reality Smasher, so Pauper aggro requires a lot of cards to support your core strategy. This results in aggro decks that have plenty of redundant effects to increase their consistency. For example, Pauper Slivers runs a whopping twelve creatures that give Slivers +1/+1, which is even more than its Modern and Legacy equivalents! This increase in redundancy gives linear aggro decks incredible consistency, and if you’re unprepared it’s easy to get run over. 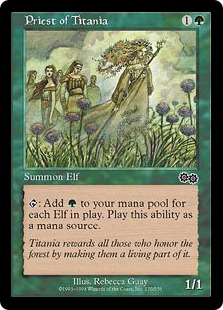 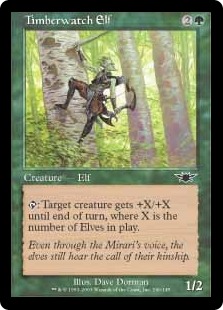 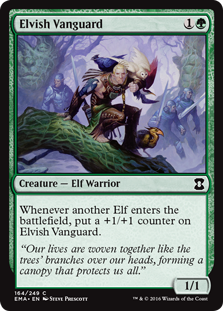 Some of the most prevalent Pauper aggro decks tend to mimic other formats, so if you’re familiar with how to play those versions they’re fairly analogous to pick up. Elves is one of the most common these days, and that’s due to its explosive nature and its ability to use Wellwisher, Priest of Titania, and Timberwatch Elf for massive effects. This isn’t too far off from the playstyle of Modern Elves, which uses Elvish Archdruid and Heritage Druid to churn out multiple Elves a turn and eventually overwhelming the opponent with Ezuri, Renegade Leader. In Pauper, we instead get to attack with all of our creatures and tap Timberwatch Elf to pump whichever attacker goes through unblocked. Furthermore, Legacy Elves mainstay Quirion Ranger is in fact a common, so you get to use its ability to untap and retap Timberwatch Elf to double that effect for what is almost always a lethal attack. 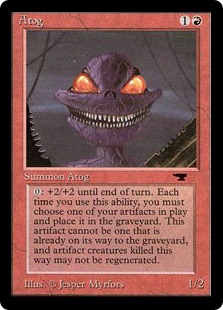 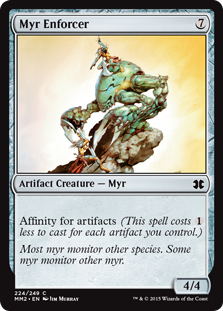 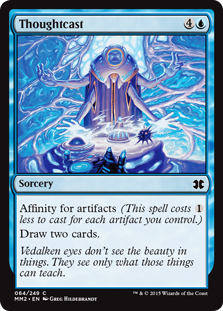 Another common aggro deck is Affinity, and unlike its Modern counterpart, it doesn’t try to dump its entire hand onto the table on turn 1. Instead, it seeks to actually use cards with the Affinity mechanic, like Thoughtcast and Frogmite, to out-value the opponent. After all, why not churn out 4/4 Myr Enforcer for free while your opponents actually pay mana for spells like a sucker? Pauper Affinity also has the distinction of being able to use artifact lands like Seat of the Synod, which when factoring the discount Affinity gives your spells effectively lets each of your lands tap for two mana. To close out the game, Affinity typically has two game plans: beat down with 4/4 Carapace Forger and Myr Enforcers, or sacrifice the entire board to Atog then use Temur Battle Rage for an absurd amount of damage. Temur Battle Rage gives the deck a surprise factor that’s difficult to play around, and barring a Fog it’s usually game over on the spot. Some builds even pack Fling for when they have a Fog on hand, so you have to be wary at all times. 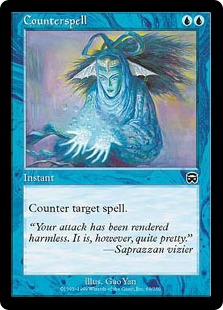 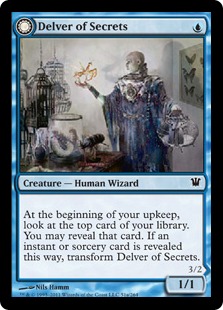 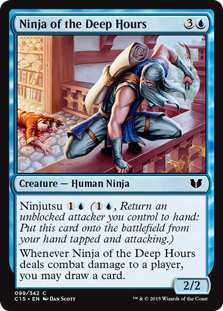 The third most popular aggro deck, and one that anyone playing Magic since Innistrad will be all too familiar with, is Delver. Delver of Secrets has seen Standard, Modern, and Legacy play, and the sheer amount of tempo and card advantage these decks can generate gives them an edge against most slower midrange decks. This deck packs all the Legacy cantrip power of Brainstorm and Ponder to filter their draws, all the while maintaining tempo over the opponent with Spellstutter Sprite and Counterspell. It can be an incredibly punishing deck to play against, and as such, Pauper Delver is one of the more threatening interactive decks in the format.

Control decks in Pauper are surprisingly robust despite the format’s aggressive tendencies. The ability to grind out a game from behind and drag down an 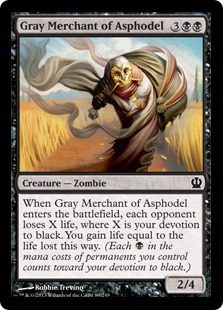 aggressive opponent can be difficult without true board wipes like Wrath of God, but Pauper Control decks manage just fine with Pestilence, Crypt Rats, and just piles of spot removal. Mono-Black Control is one of the best Control decks for its ability to abuse these effects to ensure that the opponent’s board state is at a minimum. Between Cuombajj Witches, Victim of Night, Chainer’s Edict, and Tendrils of Corruption, Mono-Black can get rid of even the most resilient threats, and these decks often pack Wrench Mind and Chittering Rats to go after the opponent’s hand to further cut them off of options. After the board is on lockdown, this deck often takes the old Theros Standard route of casting Gray Merchant of Asphodel to close out the game with a massive life point swing.

One of the other methods of playing the Control game is using Fog effects to stall out the board until they win through brute card advantage. One of the more recent developments in Pauper is the advent of Dinrova Tron, a Tron deck centred around using Ghostly Flicker, Mnemonic Wall, and Dinrova Horror to clear the board and empty the opponent’s hand. This deck is all about the instant-speed interaction, packing a variety of counterspells, spot removal, and card filtering all bolstered by Mystic Teachings. There’s a lot going on with this deck, and it’s very easy to sequence your plays incorrectly, but with practice it becomes second nature to get all the moving pieces in line for what amounts to a backbreaking grind to the finish. 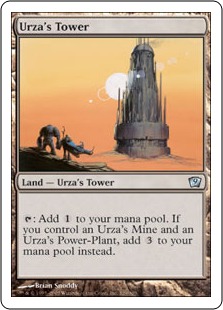 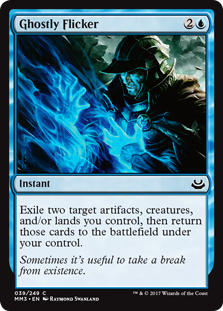 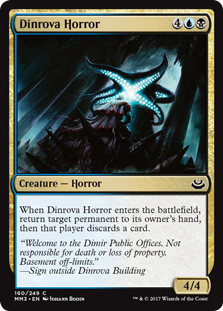 While uncommon, Pauper Combo decks do exist, and they can be truly terrifying when they get going. Tireless Tribe Combo is a deck that aims to pump up Tireless Tribe’s toughness by discarding cards, then switching it’s power and toughness with Inside Out. Because the bonus from the Tribe’s ability is so large, you really only need to discard a total of five cards to get it to lethal damage, so the deck packs a massive amount of cantrips and card filtering. As such, the deck runs a full set of Gush to maximize the amount of cards in your hand the turn you combo off. With Gush, you can float mana, bounce two Islands to your hand, and cast it for free to draw two cards, effectively netting you four cards to discard to the Tireless Tribe. 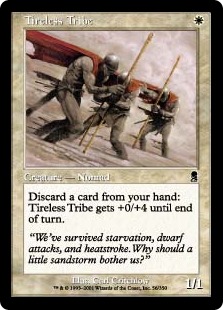 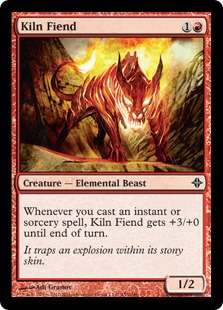 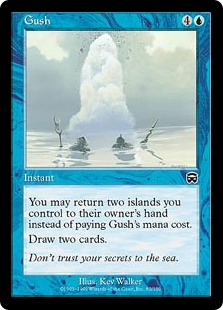 In a similar vein to Tireless Tribe is Izzet Blitz, a deck built around dealing lethal damage with Kiln Fiend and Nivix Cyclops. While on the surface this looks like a regular aggro/tempo deck, it plays much closer to a Storm deck, chaining spell after spell until you’ve pumped your creature’s attack to insane levels. Where this archetype gets particularly spicy is the inclusion of Temur Battle Rage, which not only boosts your Kiln Fiend’s attack by three, but also gives it double strike and trample. This allows you to cut the number of spells required to get lethal in half, and even gives you outs when the opponent has blockers. Because of the abundance of free and cheap spells in this deck, you can often reach 20+ power by turn 3, and you end up seeing a ton of cards through Brainstorm, Ponder, and Preordain, so the deck has incredible consistency. 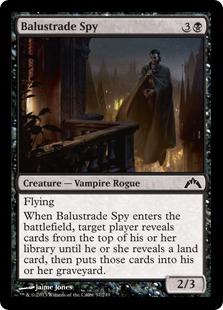 easily the funniest when it goes off. 1-Land Spy is designed to win as early as turn 1 by using Balustrade Spy to mill yourself, then get Haunting Misery back to your hand via Anarchist or Conjurer’s Bauble, then exile creatures from your graveyard to deal lethal damage. This deck runs every free mana effect you can think of, from Lotus Petal to Simian Spirit Guide to Land Grant, all the while trying to chain Dark Ritual and Cabal Ritual together to get to the mana for the Spy. Where this gets really crazy is when you have Songs of the Damned, a ritual effect that nets you one mana for each creature in your graveyard. Casting this after you’ve decked yourself will often result in 20+ mana, more than enough to use Morgue Theft to bring back your Anarchist, a mana filter like Manaforge Cinder, and your Haunting Misery all in one turn. While this deck is incredibly fast with the right draw, since you don’t have access to nearly as much free mana as you would with Legacy, there are a lot of hands where you don’t actually do anything until it’s way too late, so approach this deck with caution if you’re looking for a first Pauper deck.

Pauper is an incredibly diverse format with enough interaction and powerful spells to appeal to nearly every player. I like to think of it as the half step between Legacy and Modern at a fraction of the price. I’ve built an entire gauntlet of decks for less than the price of a single Liliana of the Veil, and ultimately the biggest involved was buying sleeves for everything. As well, the Pauper community is incredibly welcoming, especially now that the format is receiving a push at the Grand Prix side event level. There’s an enthusiasm you don’t see that often in larger Magic communities, so that’s always a breath of fresh air. So if you’re looking to play some insanely strong decks for virtually no money, Pauper is the format for you.