Dominaria in the Modern Age

One of the biggest questions I often hear when it comes to new Standard sets is how much of an impact will new cards have on older formats? Modern is all the rage, especially around here, so it makes sense that Modern playability would be at the forefront of people’s minds when evaluating cards. Fortunately, Dominaria is set to shake up not only Standard, but Modern as well with cards suited for many established tiered archetypes, as well as boosting the more fun but less powerful archetypes in the format.

First and foremost is Steel Leaf Champion. Players got a taste of this card when 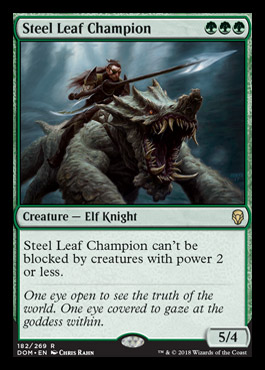 it was given out as the Store Championship promo, and the reactions have been overwhelmingly positive. A 5/4 body with evasion is huge, albeit a bit restrictive with a triple Green mana cost. This means we’re playing it almost exclusively in a mono-Green deck. While most people think it’ll fit into CoCo Elves since it can be cheated in with Collected Company or played off a turn 1 mana dork, I think it’s best suited for the Mono-Green Stompy deck that pops up from time to time. This is almost a strict upgrade from archetype staple Leatherback Baloth, and by having the same mana cost, we don’t lose on devotion for Aspect of Hydra. Couple that with a suite of other pump spells and aggressive creatures and you have a recipe for success.

While Elves have received some much needed attention in Dominaria, the set also has goodies for two of Magic’s other oldest tribes. Merfolk gets Merfolk Trickster, a rather unique effect stapled to a flash creature. By blanking the abilities on an opposing creature, you can do some serious damage. For example, a blank Tarmogoyf is just a 0/1, while a blanked Master of Etherium straight up dies to state based effects. It’s a fairly versatile tool for a deck that doesn’t have much in the ways of reach, so I imagine Merfolk players will try to fit a couple copies in there. 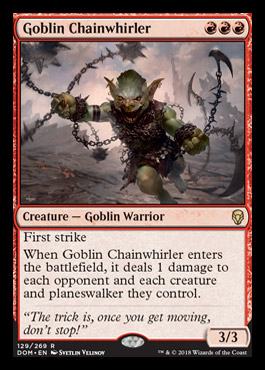 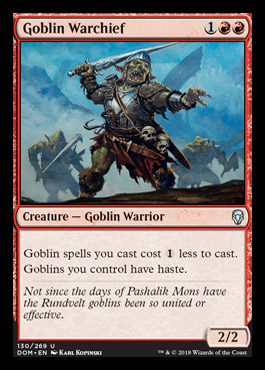 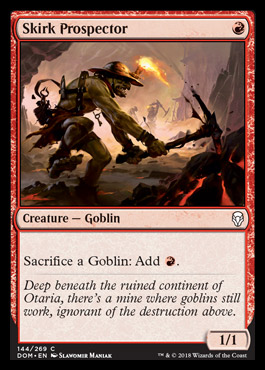 Goblins, on the other hand, have had off and on success in Modern, and it appears the powers that be at WotC have been subtly pushing the tribe with previously not Modern legal reprints like Goblin Piledriver. Dominaria cranks this up to 11 with Skirk Prospector and Goblin Warchief, as well as newcomer Goblin Chainwhirler. Between Prospector’s mana acceleration, the Warchief’s cost reduction, and Chainwhirler’s ability to clear away chump blocking X/1 creatures, perhaps now Goblins will have what it takes to fit into Modern. If not, we may very well need to see the entire Legacy Goblin deck get a Modern reprint in order for it to work.

From creature type tribal to tribal 2-drops, Shanna, Sisay’s Legacy is a fairly solid beatstick in Hate Bears, token decks, and Collected Company decks. At worst she’s a 1/1 for two with pseudo-hexproof, but the larger your board gets, the more powerful she becomes. This gives Hate Bears decks a pretty solid beater in a deck traditionally skewed toward chipping for two damage each turn. As a Human, she can even see play in Human tribal since that deck predicates itself on having a large board state, and when used in conjunction with Thalia’s Lieutenant Shanna becomes absolutely massive.

Of all the new legendary creatures to brew around, few have my mind buzzing the way Torgaar, Famine Incarnate does. Setting someone to 10 life is 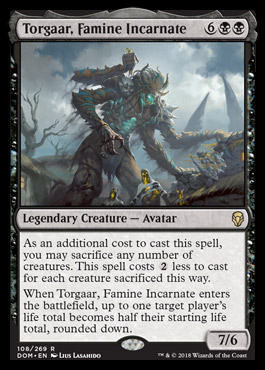 something we don’t see away from Sorin Markov, so it’s definitely an intriguing prospect. Furthermore, we have a 7/6 body and a cost reducing ability requiring sacrificed creatures, so this lends itself more to aggro shells. As such, I think Torgaar could see the most play in either a Dredge or Affinity deck. With Dredge, since you’re recurring creatures for free, it’s easy to have sacrifice fodder available. Furthermore, when the opponent is at ten life Bloodghast has haste, so theoretically you can sacrifice three Bloodghasts to Torgaar, set the opponent at ten, then play a land to get them all back and attacking immediately. An Affinity deck with Torgaar could potentially cast him on turn 1 with a sequence of Swamp, Mox Opal, and three zero-drop artifact creatures, and that’s a nut draw I would love to see in person at least once in my life.

The character Karn poses some tricky prospects for Modern. Karn Liberated is a staple of Tron decks, and his new incarnation, Karn, Scion of Urza, just doesn’t have the same impact. I believe that this new Karn is better suited to a more artifact-centric deck such as Tezzerator in order to make use of each of his abilities. As a grindy control deck, Tezzerator can make use of the additional card advantage Karn’s first two abilities provide, and making construct tokens that get larger with each artifact you play goes a long way when Tezzerator often includes Thopter Foundry-Sword of the Meek combo. Karn’s first two abilities are also beneficial to a Red prison deck like Skred which, traditionally, lack any card draw outside of Chandra, Torch of Defiance. These decks would then be able to dig further down into their actual threats so they can close out games in a reasonable timeframe. 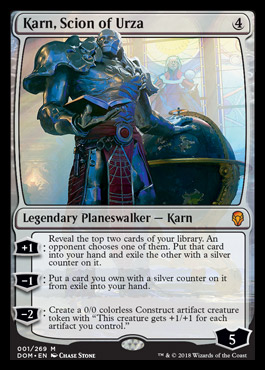 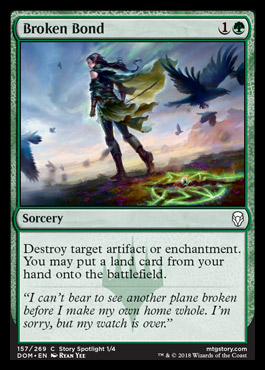 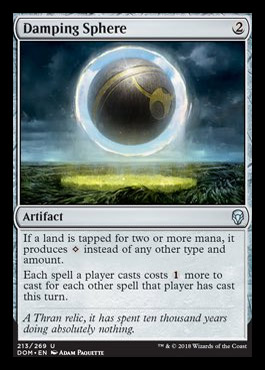 While Karn may not make the cut in Tron, the deck did receive a powerful effect for handling some of its most brutal hate cards. Broken Bond is an insane card in a deck looking to ramp like Tron, Valakut, or Amulet Titan, as it can destroy an artifact or enchantment and let you play another land. As a Tron player, I’m already looking to fit a couple copies into my maindeck to handle decks like Affinity or Ponza, and by letting me play additional land drops I could even justify adding additional lands like Ghost Quarter or Geier Reach Sanitarium into the deck to increase the odds of having that extra land in hand when I cast Broken Bond. This also answers a very hyped up card in Dominaria touted to kill Tron, so I absolutely relish having an answer this powerful in the same set.

What could possibly shut down Tron, you ask? Damping Sphere is one of the most obvious “I don’t want you to have fun” cards printed in a long time. By making every land that would tap for multiple mana instead tap for just one colourless mana. This is poised to be a cross format all-star, hating on the likes of Tron lands, Ravnica bounce lands, and even the mighty Gaea’s Cradle in Legacy. The extra ability absolutely shuts down Storm decks, and even hinders Burn and Snapcaster Mage decks looking to chain spells together in a single turn. However, I think that Damping Sphere is much better suited for hating on the latter decks rather than ramp deck for one simple reason: Blood Moon. Decks like Tron have been dealing with Blood Moon for ages, and already pack the tools necessary to fight both Blood Moon and Damping Sphere. As well, Tron can often just hardcast their threats at cost, whereas a Storm deck has to try extra hard to find their artifact hate, otherwise they’re locked out of the game entirely.

Finally, I want to talk about two fairly innocuous cards that got a little swept under the rug compared to the bigger, flashier cards in the set. Zhalfirin Void isn’t impressive at first glance. A colourless scry land is pretty mediocre, but it gives Eldrazi decks and even Tron a little extra card manipulation that they otherwise wouldn’t have. One of Eldrazi Stompy’s biggest weaknesses is that it pretty 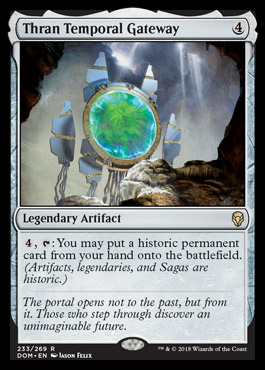 much just plays what it draws, as it has virtually no way to manipulate their top card like with a fetch land or Serum Visions. Zhalfirin Void gives these decks a way to control a little bit of their own fate, which is a huge deal for the deck.

Thran Temporal Gateway is Quicksilver Amulet with a twist. While most of the time Quicksilver Amulet is activated it’s putting a legendary Eldrazi or some other massive creature into play as is, Thran Temporal Gateway has a significant advantage in that it can cheat any legend or artifact into play at instant speed for just four mana. You could cheat a planeswalker like Jace, the Mind Sculptor or Ugin, the Spirit Dragon in without worrying about it getting countered. Even a disruptive artifact like Platinum Emperion, Knowledge Pool, or my favourite, Omen Machine at instant-speed can be devastating to an unprepared opponent, and cheating that much mana gives me incentive to try it as a two-of in Tron since every threat falls into the category of “Historic card”. All in all, Thran Temporal Gateway is a uniquely efficient card that I would love to build around.

Dominaria is poised to be an incredibly influential set when it comes to Constructed formats. Standard gets a much needed shake up with a new set of cards. Commander and Brawl get a boatload of new legends to use as Commanders. And while the threshold to see Modern play is considerably higher, these cards all have what it takes to make a significant impact on the format. From tribal strategies to big mana to broken early plays with Torgaar, Famine Incarnate, I’m eagerly awaiting my first Modern event with Dominaria.