Over the weekend, Legends Warehouse hosted our Store Championship for Rivals of Ixalan. Standard players duked it out for the prestigious Teferi playmat and the title of champion. After several hard fought rounds, a victor emerged to claim the mat: Me. I had previously had considerable success at our Sunday Showdowns with UW God-Pharaoh’s Gift, but after a particularly unsavoury 0-3 the previous week, I felt like it was time to change decks. With two days to go before the Store Championship and virtually no practice, I switched to the following deck.

For those of you with really good memories, I had previously written about a version of this archetype back before Ixalan entered the scene. Since the rotation of Battle for Zendikar to Eldritch Moon, this deck has actually become even better positioned now that it doesn’t have to worry about early aggressors like Gideon, Ally of Zendikar or Diregraf Colossus. As well, most people have forgotten about packing graveyard hate outside of a Scavenger Grounds or two, 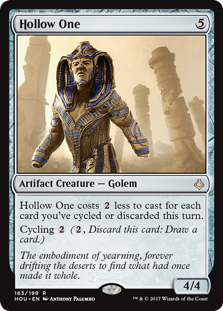 instead focusing on using artifact removal to stop God-Pharaoh’s Gift itself. This led me to opt for a shell less reliant on the Gift since the UW build almost ceases to function without it in play.

One significant change I made from the previous incarnation was the inclusion of Hollow One over Gifted Aetherborn. The 2/3 deathtouch and lifelink was fine back when games were decided on the ground, but as Standard has changed in recent months having three toughness has become a liability. This is a format of Abrade and Lightning Strike, both of which absolutely hammer Gifted Aetherborn. Hollow One, on the other hand, has the potential to be cast for free in this deck by cycling three cards in a turn. This not only provides a much faster clock, it also makes it easier to wall off other, smaller threats while Vile Manifestation and Horror of the Broken Lands swing in for tons of damage. 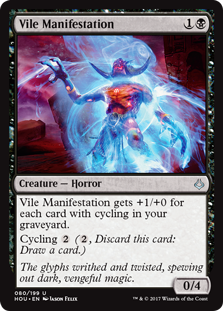 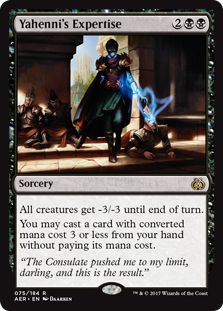 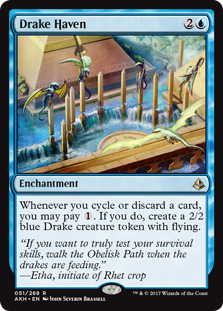 The sideboard also changed a fair bit since I sleeved up this deck. Since the format has gotten decidedly more creature-based, I figured it made sense to include an additional Yahenni’s Expertise in the sideboard. I chose this over sweepers like Bontu’s Last Reckoning or Golden Demise because it allowed me to cast Champion of Wits or Gate to the Afterlife in the same turn. This way I wouldn’t lose any momentum by taking a turn to board wipe. As well, virtually none of my threats die to -3/-3, so that often meant Expertise was one-sided. Duress was a huge gain for the deck as it allowed me to be more proactive in my disruption against control decks. Looking at their hand and taking a sweeper or some much needed card draw would keep opponents on the back foot by denying them answers to my threats.

While I had Drake Haven in the previous build, I kept it around for a slightly different reason than before. The first time around Drake Haven was there to lock down the board against decks relied on singular threats too big for my X/4s to handle. I would be able to chump block with tokens while counterpunching with my cycling creatures every turn. Now that Abrade is seeing maindeck play as a three or four-of in decks, I needed ways to get repeatable board presence 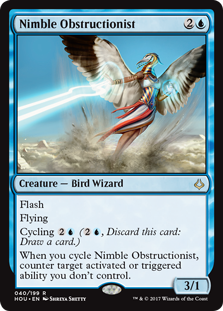 without relying on God-Pharaoh’s Gift staying in play. We do so much cycling every turn in this deck that it’s fairly common to get three or more tokens a turn in the late game.

Finally, I had the option of running either Nimble Obstructionist or Sorcerous Spyglass to round out the sideboard. I wanted ways to stop Scavenger Grounds should they come up since it can be incredibly damaging to both the Vile Manifestation aggro plan and the Gift plan. Sorcerous Spyglass originally made the cut, but I eventually swapped it for the Obstructionist due to it being another cycling card, and that the trigger can stop triggered abilities as well as activated abilities. This has the flexibility of stopping Cast Out’s EtB trigger, planeswalker activations, and even The Scarab God’s reanimation ability while still drawing a card, making it a huge tempo play. The only difficult part was keeping three mana open at all times when I often had to main phase cycle in order to cast a discounted Hollow One, but I found over time it wasn’t the end of the world.

The Store Championship itself ended up being a fairly different meta than I anticipated, with control players jumping to aggro and vice versa to catch everyone off guard. However, this didn’t really impact me as I proceeded to not drop a single game all day. Nearly all of my opponents ended up being on slower Blue control decks like UW Approach of the Second Sun, or some midrange energy variant. These were the matchups I wanted most as they don’t really do anything that interacts with what I’m doing, and the cards that do are far too slow and durdling to actually accomplish any long term value.

For example, while my round 1 Grixis Energy opponent was busy playing Glint-Sleeve Siphoner and Whirler Virtuoso, I had Hollow Ones and Archfiend of Ifnir keeping his threats on permanent chump block duty. These are staple cards capable of grinding out nearly any deck, and I just...ignored them entirely. Constantly clearing the board of thopter tokens with the Archfiend not only kept me free to attack, but since it was costing him energy to make them, it also depleted his energy reserves, creating a chain reaction that subsequently stopped him from drawing extra cards with Siphoner. In the end it was a battle between a glorified Goblin Piker and getting a free 4/4 every turn. 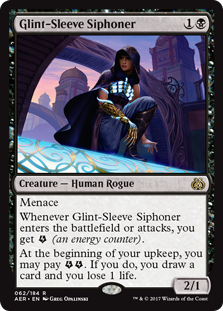 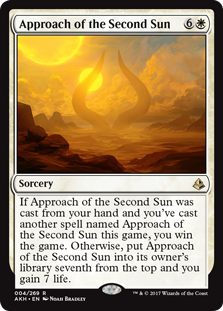 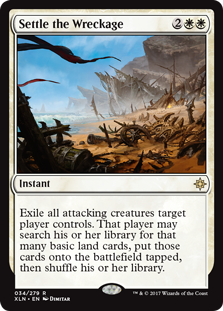 The Approach matchups were just brutal to play. I was initially concerned with Approach’s ability to sweep larger bodies with Fumigate and Settle the Wreckage, but I found I could mitigate these cards by attacking with one large creature at a time. As well, in both of the rounds I played this matchup, Hollow One really shined, as I got to cast multiple copies on turn 3 by cycling three times in a turn. This transformed what was once an empty board to a three turn clock as I was threatening eight damage a turn. By the time they were able to tap out for a Fumigate, I had Gate to the Afterlife online to tutor a Gift and reanimate Vile Manifestation for a lethal attack. It was a complete 180 from the energy matchup as the deck demonstrated how it can play a punishing aggro game as well as a grinding control game.

My sideboard games in the Approach matchup weren’t any more fair that game 1, as the combination of Duress and Negate shut down any interaction they had, all the while building up my graveyard with plenty of reanimation fodder. Taking away Settle the Wreckage and Hieroglyphic Illumination with Duress left them with just a single Drake Haven in hand, and cycling instant-speed to dig for a Negate to counter an Authority of the Consuls put the game away, allowing Horror of the Broken Lands to really shine. I was able to bring back a pair of them and proceed to chain cyclers into cyclers to boost them both up to ten power for a lethal attack by turn 6.

At the end of the day, our top 4 looked like this:

Going forward with the deck, I would most likely try to find room for a bounce spell like Consign//Oblivion or Perilous Voyage. While the Nimble Obstructionist was solid, there were times where I didn’t have one in hand but needed to deal with a Cast Out or The Scarab God, even temporarily to just get the edge in tempo. With a bounce spell I could wait until my opponent’s tapped out for their threat then bounce it back to their hand, effectively wasting their turn at instant-speed. Lost Legacy was okay in the Approach matchup, but I don’t see myself going crazy over the card against most other decks, so that may very well be the cut.

I’m incredibly happy with how the deck performed, and I’m especially impressed by Hollow One. I’ve seen this card do insane things in Modern and Vintage, and after seeing it in action I can safely add Standard to that list. While the deck doesn’t gain much from Dominaria as it is basically an Amonkhet Block Constructed deck, I look forward to experimenting with interactive options like Cast Down and Unwind. In the meantime, I’ll settle for cycling through my deck like there’s no tomorrow.